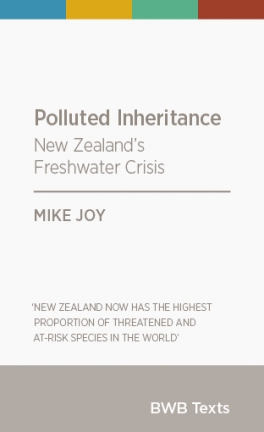 A new book written by Dr Mike Joy on New Zealand’s freshwater crisis has recently been published by BWB Texts.

The book highlights the main threats to New Zealand’s freshwater ecosystems, how the freshwater crisis came about and how this reality is routinely denied and concealed from the public. Polluted Inheritance is available in paperback and ebook formats.

“New Zealand’s dairy industry is big business. But what are the hidden – and not so hidden – costs of intensive farming? Evidence presented here by ecologist Mike Joy demonstrates that intensive dairy farming has degraded our freshwater rivers, streams and lakes to an alarming degree. This situation, he argues, has arisen primarily through governmental policy that prioritises short-term economic growth over long-term environmental sustainability.”

Just last week Mike Joy was awarded the Reo mō te Awa River Voice Award at the 2015 New Zealand River Awards which recognizes an individual or group that has been an outstanding communicator about the issues facing New Zealand’s rivers and streams.