What is palm kernel expeller?

I’m sure most people have heard of palm oil, and a lot of environmental conscious people may try and avoid products containing palm oil given the environmental effects surrounding its production (these will be discussed later). There are many organisations that campaign against the use of palm oil and inform consumers about the vast array of products that contain palm oil and brands that are palm oil free.

Palm kernel is less known about and it is very rarely campaigned against. Perhaps this is because its use is much less widespread – all the palm kernel imported into New Zealand is used for dairy feed. It may have more to do with not wanting to take a stand against the dairy industry. Although this didn’t stop Greenpeace.

So what exactly is Palm Kernel? Palm kernel expeller, known as PKE for short or palm kernel meal, is a product left after the oil is extracted from the palm seeds of the oil palm. After oil extraction and the flesh of the fruit has been stripped, the solid part of the seed kernel is mashed to make PKE. The main products from oil palm are crude palm oil, palm kernel oil (used mainly in foods, cosmetics, and biofuels), and PKE, used predominantly for animal feed and power generation.  Increasingly, PKE has been used as a standard input of production for dairy farming in New Zealand. Now, there little way to know if most of the milk sold in stores is produced without palm kernel, unless it is labelled as palm kernel-free.

How much PKE does New Zealand use?

Imports of PKE into New Zealand began in 1992 with 15 tonnes. Very little was imported until 1999 and since then imports have increased substantially to 2 million tonnes in 2014, costing almost NZ$500 million [1] (Figure 2).

Demand for PKE in New Zealand escalates particularly in times of drought, flooding and volatile milk prices [2]. The dairy industry argues that PKE is the only alternative (in intensive systems) during drought conditions [3].  These demand peaks are likely to increase as drought events are predicted to amplify with climate change [4]. The impact of drought events were particularly evident in 2008, when PKE imports rose significantly, and early 2013.

Where is PKE grown?

Palm plantations are mainly situated in South East Asia. Indonesia is the largest producer of palm kernel with over half of the total production and together with Malaysia produces 85 per cent of the total PKE [5] (Figure 3). 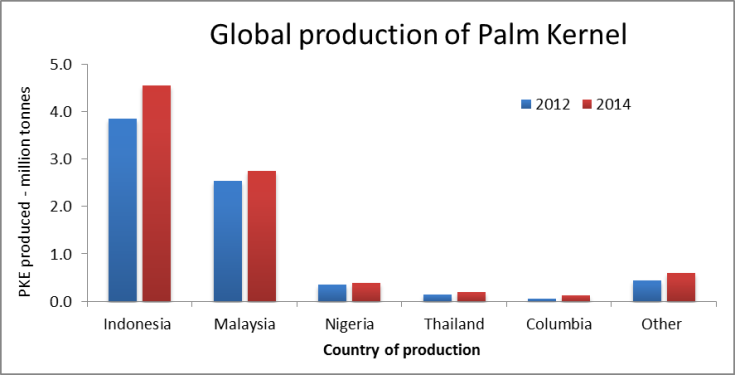 Who are the biggest consumers of PKE?

What are the environmental impacts of palm kernel?

Since PKE is derived from palm oil production, we must take into account the effects of palm oil plantations and not just dismiss palm kernel as a by-product.

Palm oil production is a major driver of deforestation in South East Asia – areas of rainforest and peat lands are converted to palm plantations as the industry expands [8]. At current deforestation rates, the United Nations Environment Programme (UNEP) warned that 98 per cent of Indonesia’s rainforest could be destroyed by 2022 and lowland forest much sooner [9]. It is estimated that over half of the planting of oil palm between 1990-2005 in Malaysia and Indonesia involved clearing native forests, despite producers asserting that forests are not being cleared to grow oil palm [6].

Palm production is also one of the leading threats to the orang-utan and the Sumatran tiger, among other species, due to the loss of natural forest habitat [9]. The Borneo Orang-utan is classified as endangered, with estimates of between 45,000 and 69,000 left in the wild [11], while the Sumatran tiger is listed as critically endangered with a population possibly less than 500 [12]. Areas cleared for palm oil across the Island of Borneo are part of the last refuges for the critically endangered orang-utan.

It has been estimated that Indonesia and Brazil produced 55 per cent of emissions from tropical deforestation between 2000 and 2005 [15]. Moreover, Indonesia has the fastest deforestation rate of any major forested country, losing 2 per cent of its remaining forest every year [16]. Indonesia was ranked the eighth largest global emitter of GHG emissions in 2010 [17].

The main GHGs emitted by palm oil plantations are carbon dioxide, methane and nitrous oxide. Deforestation and the clearing of peatlands releases carbon dioxide from biomass destruction, which can continue over many decades after deforestation has occurred [2]. Carbon dioxide is also emitted from energy for production operations and inorganic fertiliser manufacture. Methane is released from palm oil mill effluent and nitrous oxide is released from soil from the application of process residues and fertilisers as well as the depletion of soil organic matter.

Peatlands store between a fifth and a third of the total carbon contained in terrestrial biosphere, but cover just 3 per cent of Earth’s land surfaces. Deforestation and burning of peatland in Indonesia releases about 1.8 billion tonnes of GHG emissions every year [16], equaling around 4 per cent of global GHG emissions [17]. The production of one tonne of PKE was estimated to emit up to 18.2 tonnes of carbon dioxide equivalents (CO2-e), depending on prior land use [2].

So how is dairy connected to this?

Fonterra obtains its PKE from Wilmar International, the largest trader of palm oil and kernel with a reputation as one of the most environmentally destructive palm companies.

Wilmar has been implicated in cases of rainforest destruction, illegal burning, and social conflicts over community lands [18]. In 2012, Wilmar was ranked the world’s worst company for corporate sustainability and environmental impact out of 500 global companies by Newsweek [19].

However, the Ministry for Primary Industries claims New Zealand plays no part in the destruction in South-East Asia, claiming that the expansion of the industry and deforestation is driven by the demand for palm oil alone, not other palm products. Claims are made that palm kernel is only a low-value by-product of palm oil [20], that is “otherwise burnt or left to rot on the ground” [21].

However, according to the Malaysian Palm Oil Board, PKE is “an important product from the oil palm industry” which generates substantial export earnings for Malaysia [22]. In 2014, 52 per cent of the value of PKE imported into New Zealand was from Malaysia ($255 million) [1]. Thus, New Zealand imports of PKE are an important part of the palm industry, as New Zealand is the biggest single country importer of PKE.

Are there sustainable palm plantations?

The Roundtable on Sustainable Palm Oil (RSPO) is a voluntary certification scheme set up in 2002 to obtain palm oil from sustainable sources. However, the RSPO has failed to deliver major changes on the ground. Members of the RSPO, which include companies such as Unilever, Cadbury and Nestle, are dependent on suppliers that are involved in deforestation and peatland conversion [16]. The RSPO is required to carry out assessments before plantations are certified sustainable. However, assessments are not carried out in many plantations that are certified and there is little traceability [8] so consumers do not know the origin of their palm products. It is suggested many companies use the RSPO certificate as a way of ‘green washing’ while not changing business practices [8]. With weak standards on GHG emissions, and poor monitoring and enforcement of standards, the RSPO is justifying further expansion of palm plantations and increasing demand for palm products by creating a deception of sustainable palm oil.

In 2009, Fonterra became a member of the RSPO [26] – which is a start in acknowledging the problem with palm oil. However, as discussed before, this certification scheme cannot be entirely trustworthy.

The New Zealand dairy industry is a key player in purchasing palm products, accounting for a quarter of worldwide palm kernel expeller consumption. By importing products that are associated with environmental destruction and high GHG emissions, the dairy industry are risking the reputation of not only themselves but other export industries and New Zealand’s ‘clean green’ image. This may harm New Zealand’s export revenue.

Other issues with importing PKE

Biosecurity risks from importing palm kernel include importing insects, risks from soil contamination and foot and mouth, as well as food safety issues [25]. Two Federated Farmers members visited Malaysian palm factories in 2012 and observed birds, rodents, monkeys and cattle near processed PKE in an area of known foot and mouth outbreaks [27]. They reported that post-production handling and storage of PKE poses severe risks and breaches New Zealand’s Health Import Standards (HIS). HIS set out requirements that must be met to mitigate the risk associated with importing PKE. To eliminate risk from foot and mouth and for New Zealand biosecurity protection, products are required to be heat treated and stored in bird-proof facilities to avoid contamination [20]. However, representatives from Federated Farmers were told that biosecurity was a not a matter for the Malaysian Government or the palm industry and that it would be the responsibility of the New Zealand Government to ensure the product was not contaminated when it arrived at the border. Furthermore, the Federated Farmers members argued that contamination occurred during stages of storage and processes after PKE production, and heat treatment (which is carried out as part of the crushing process, not for biosecurity purposes) occurs weeks or even months prior to export. Therefore, heat treatment cannot be relied on for biosecurity protection as it is too early in the process.

The majority of PKE is sold to commodity traders who consolidate products at the port for bulk export so there is little traceability to the factory where the products came from [27]. This is inconsistent with industry claims that imported PKE is sustainably sourced and health standard approved as it is not known which plants imports come from.

The dairy industry argues that PKE is only 1 per cent of what dairy cows are fed [8]. For such a small amount, it begs the question why New Zealand imports a product with such high environmental, social, biosecurity, and health implications. One postulation is that farmers are pressured to produce more milk just to maintain profits [28]. New Zealand farmers have to complete globally to produce increasing amounts of milk powder for growing developing nations. Farmers must also meet Fonterra’s growth production goal of 4 per cent per annum [29].  To produce more from the same amount of land, farmers become dependent on inputs such as supplementary feed and fertilisers. If the impacts of the inputs are not questioned or acknowledged, and hence not implicated in the products image, use of inputs will continue.

[29]Deans, N., & Hackwell, K. (2008). Dairying and declining water quality: Why has the dairying and clean streams accord not delivered cleaner streams? Fish and Game and Forest and Bird.