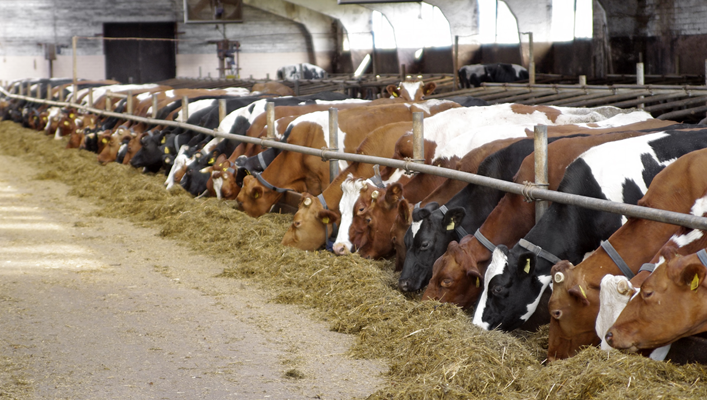 The environmental impacts of a meat-based diet.

It is well recognised that humans have a substantial impact on the environment, with some activities and land use being more harmful than others. Humanity’s consumption of resources and the way land is managed has a huge role in the deterioration of the environment.

Food production is linked to a substantial array of environmental and social harms and benefits. One response to these impacts that is being increasingly discussed is eating less meat. However, unlike the multitude of other actions paraded about to solve problems of climate change, water scarcity, energy use and pollution, our diet is out-of-bounds for discussion on reducing environmental harms.  Changing our diet for reasons other than personal tends, ironically, to be a sensitive topic.

So what are the differences between vegetarians, vegans, and plant-based diets? While vegetarians do not eat meat, fish, or poultry, vegans in addition do not use other animal products and by-products, such as eggs, dairy products, honey, leather, fur, silk, wool, velvet, cosmetics, and soaps derived from animal products. A plant-based diet excludes meat, poultry, fish, dairy products, and eggs, but may include consumption of other animal products not included in the diet. Of course, there are also variations in omnivore diets, which will have varying impacts.

Food is culturally and socially ingrained in our lives, so it is no surprise that this is a difficult practice to change and one that we fiercely defend. A team of researchers found that the vast majority of omnivores defend eating meat under four false rationalizations (4Ns) – the belief that eating meat is natural, normal, necessary, and nice – each of which help individuals justify actions that are increasingly coming under public scrutiny [1].

There is overwhelming evidence that animal agriculture in particular causes substantial and disproportionate environmental impacts. Eliminating animal products will reduce ones individual environmental and carbon footprint. The production of animal products is inefficient in terms of land, water and energy use, and is more damaging from a biodiversity, climate change and animal welfare point of view than producing plant based products [2].

Here, we explore the inefficiencies in producing meat products and, where possible, compare with plant based products. 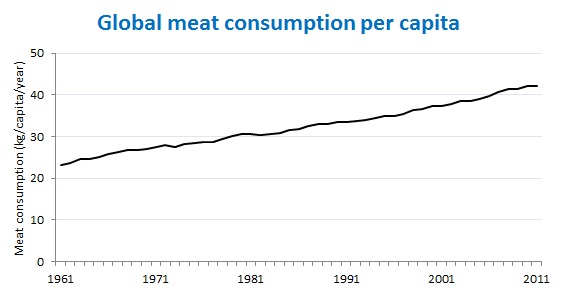 According to Smil [2] “mass-scale meat production is one of the most environmentally burdensome activities” (pg. 67). Impacts range from water contamination, soil erosion, and global atmospheric changes from greenhouse gas (GHG) emissions. Increases in meat production have required a large-scale shift from diversified farmland and rainforests to “monocultures of animal feed”. Moreover, Smil argues it is hugely inefficient to feed edible grains to farm animals, instead of eating them ourselves.

There are huge variations globally in livestock production systems, management practices, resource-use efficiency, and mitigation potentials [5]. Solutions therefore, will generally be local and highly situation-specific. There is a substantial lack of comparable data between food production systems in New Zealand, as well as between countries. Some forms of animal production will have lower environmental impacts in New Zealand, while others may be worse.

Land use, feed, and efficiency 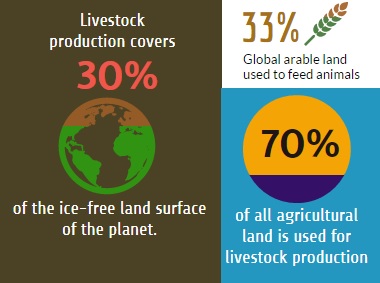 Livestock farming requires a large amount of land. Livestock production, including land to grow feed crops and graze animals, covers 30 per cent of the ice-free land surface of the planet, and 70 per cent of all agricultural land [6]. Thirty-three per cent of the global arable land is used to feed animals [6].

Large variations exist between animal production types and regions. For instance, in the U.S., beef uses around 88 per cent of all land allocated to producing animal-based calories [7] but huge differences in grains or pasture are required to feed cows in different regions. For example in North American or Europe, a cow consumes about 75 kg to 300 kg of dry matter (grass or grain) to produce a kg of protein. However, in sub-Saharan Africa a cow might need 500 kg to 2,000 kg of dry matter to produce a kg of protein because of the poor feed quality and high mortality rates in herds of undernourished and sick animals [5]

In most cases, livestock farming requires more land and feed to produce the same amount of calories or protein than those provided by non-animal production methods. According to Penning de Vries and others an affluent diet containing animal products requires three times more food biomass per capita (about 1,530 kg per year/person) than a healthy, largely vegetarian diet (about 476 kg per year/person) (Figure 3) [9]. This is largely because of the feed required for livestock farming, which could instead be used to feed people. Globally, 77 million tonnes of human edible protein are fed to livestock, while 58 million tonnes of human edible animal protein is received back [6]. 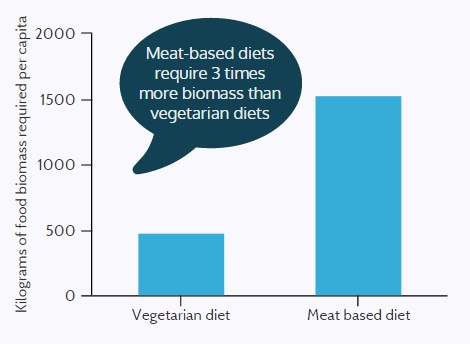 In 1990, the World Hunger Program calculated that the world harvest at that time could provide a vegetarian diet for 6 billion people, given no diversion of grain to feeding livestock, whereas a meat-rich diet could only support 2.6 billion people [10]. We are already into deficit consumption of land, largely made up by over-fishing the oceans. This is not sustainable; it has been estimated that large predatory fish biomass is only about 10 per cent of pre-industrial levels [11]. Farming fish, thought to be a solution to this problem, is not helping; the production of one kilogram of farmed fish flesh requires around five kilograms of wild caught fish [12]. 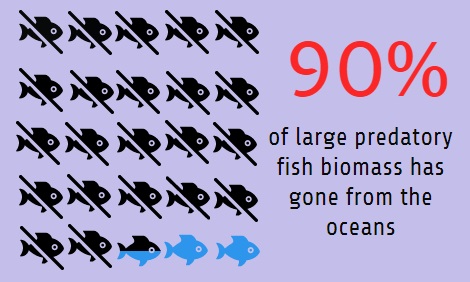 Since 1990 (the year the world harvest was based on), not only has the population increased but so has global meat consumption, so our resources are even more constrained to feed the entire population on a meat-based diet.

Some types of animal production are less efficient than others. A U.S based study found that beef was the least resource-efficient animal production method [7]. When comparing livestock feed calories with human consumed calories, beef came out the worst at 35:1, followed by pork (10:1), poultry (9:1), and eggs and dairy (6:1). Beef production also required more land and irrigation water, and produced more greenhouse gas emissions and nitrogen discharges than the other livestock categories. On the other hand, staple plant foods had lower impacts than all of the livestock categories. 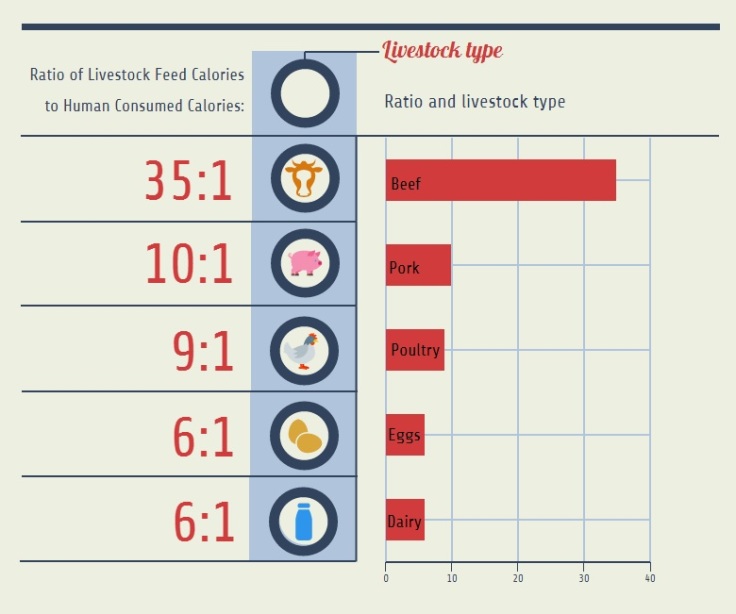 Soy is largely considered as an alternative to meat based products, but it is not without its problems.  However, the problems are mostly related to animal agriculture.

World soybean production has increased by over 500 per cent in the last 40 years [13] and soy bean meal accounts for 65 per cent of the world’s protein feed [14]. A huge amount of deforestation is caused by soybean production, primarily in South America [15]. In Brazil, approximately 18 per cent of the Amazon was deforested between 1970 and 2010, primarily for soybean cultivation and pasture expansion [16].

So where is all this soy going? 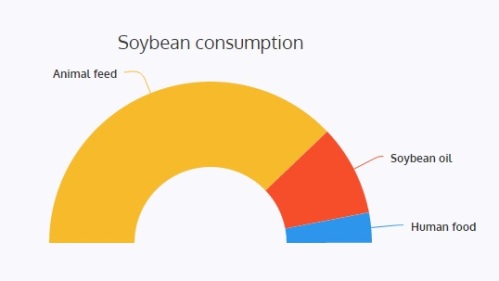 Although many vegetarian protein products are made of soy, most of the soy grown isn’t used to produce alternative meat products (Figure 4). Around 75 per cent of the world’s soy is fed directly to livestock [17]. Only six per cent is turned into human food and the rest is turned into soybean oil [15]. Europeans consume around 61 kg of soy per year/person, of which 93 per cent is in the form of animal feed [17]. In addition to other feeds, the production of one kilogram of chicken uses 575 grams of soy; likewise 263 grams of soy are used for one kilogram of pork, 173 for beef, and 307 for eggs [18]. 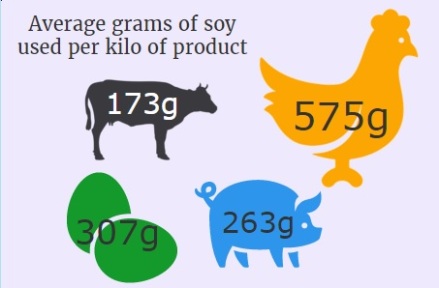 Agriculture uses around 70 per cent [19] to 80 per cent of all the freshwater globally [20], and nearly one-third of that is used for the production of animal products [21]. In the U.S., livestock production requires around 45 billion cubic metres (m3) of irrigation water (27% of the total national irrigation water), which is comparable to household consumption of water in the U.S. [7]. 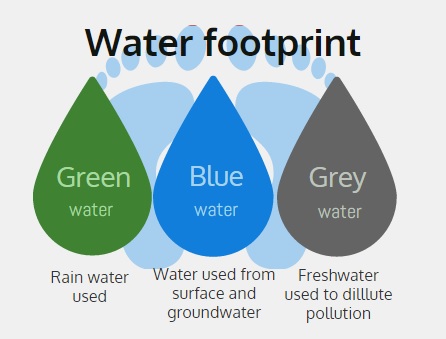 A more in-depth analysis of water use is a water footprint, which looks at both direct and indirect
water use by a consumer or producer [22]. It also includes the amount of water polluted from an activity and categorizes the types of water used into different groups (blue, green, and grey).

When comparing water footprints of animal products with crops of equivalent nutritional value, crops are clearly more conservative with their water usage [21]. Looking at different production systems in different countries, Mekonnen and Hoekstra found that per calorie, the average water footprint of beef is 20 times larger than for cereals and starchy roots [21]. Per gram of protein, milk, eggs, and chicken had a water footprint 1.5 times larger than pulses. Another study showed that animal protein requires approximately 100 times more water than an equivalent portion of vegetable protein [25].

Ercin and others found that water footprints for soy products were 3.5 (soy milk) to 15 (soy burger) times lower than equivalent sized beef and cow milk products [22]. Water footprints for New Zealand dairy milk are comparable to the global average – 945 and 1084 litres per kg of milk for Waikato and Canterbury farm systems respectively, however, the environmental implications vary between Waikato and Canterbury farms as Canterbury dairy farming is heavily reliant on irrigation [26]. 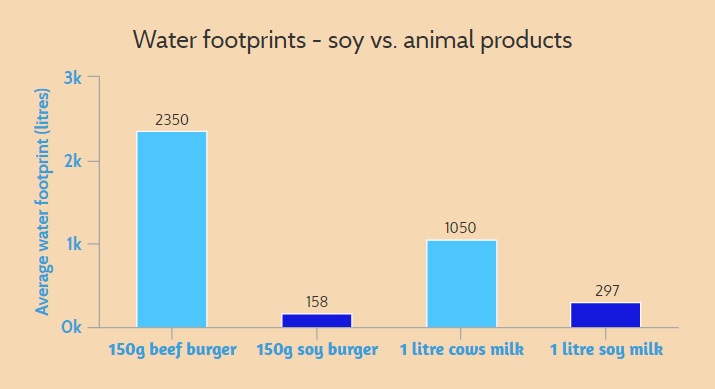 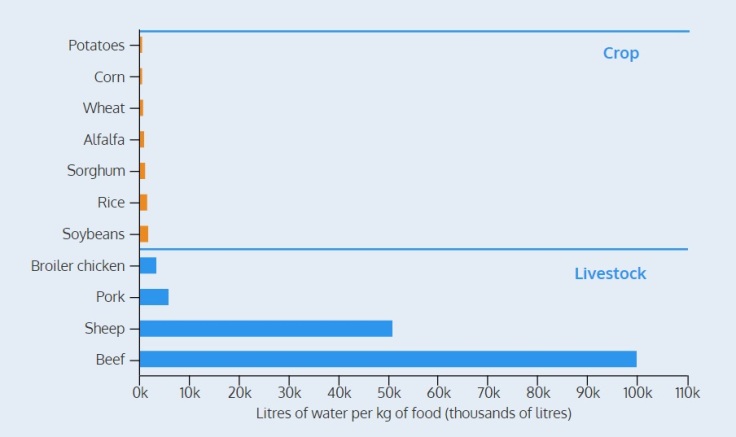 Figure 6: The estimated amount of water required for crop and livestock production [19] [25].

It appears that not only is beef hugely inefficient in water use per kg of meat, but it is also the least efficient animal product for water used per kg of protein.  Compared to other animal protein sources, crickets use the least water for their protein content (Figure 7). Crickets require just 2 square feet of pasture compared to beef’s 200 square feet [27]. Furthermore, they emit zero greenhouse gases.

Figure 7: Differences between litres of water required for the production of one kg of protein [27]. 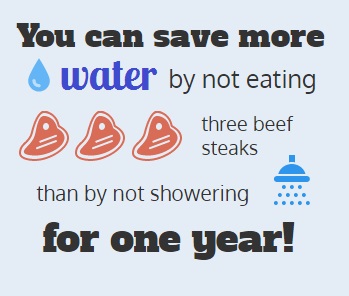 In 2015, in light of the California drought, a campaign launched (Skip Showers for Beef) highlighting the immense amount of water used for beef production compared to showers. The campaign estimated that the amount of water required for 14 hamburgers or around three steaks is equivalent to about a year of showers (using the average amount of water used per shower for one shower per day). Individuals can save more water by giving up half a kg of beef than by not showering for six months [28].

Moving to a vegetarian diet can reduce an individual’s food related water footprint by 36 per cent [23]. Although valuations can vary substantially, one study has estimated that meat based diets in industrialised countries use 3600 litres of water per day, 1.6 times more than vegetarian diets (2300 litres). Based on these calculations, a vegan diet would use 1700 litres of water. Other estimates report footprints over 15,000 litres of water a day for a meat eater, 4,500 for a vegetarian, and 1,135 for a vegan [12]. Differences may exist in calculations depending on what type of meat is consumed and where it is produced, as well as how water use is calculated. Regardless, it is clear that vegan diets use significantly less water. 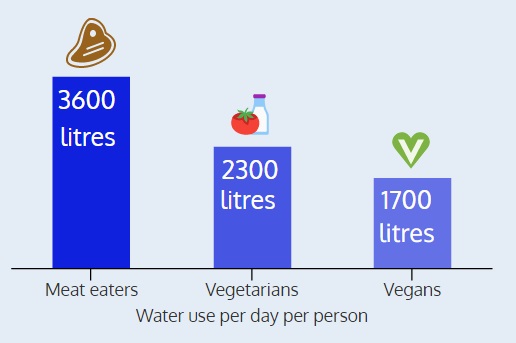 Figure 8: Food related litres of water use per day for a omnivore , vegetarian, and vegan diet [23].

[28] World Watch Institute (2004). Meat. Now, it’s not personal! But like it or not, meant-eating is becoming a problem for everyone on the planet. World Watch Magazine, 17, 4. Retrieved from World Watch