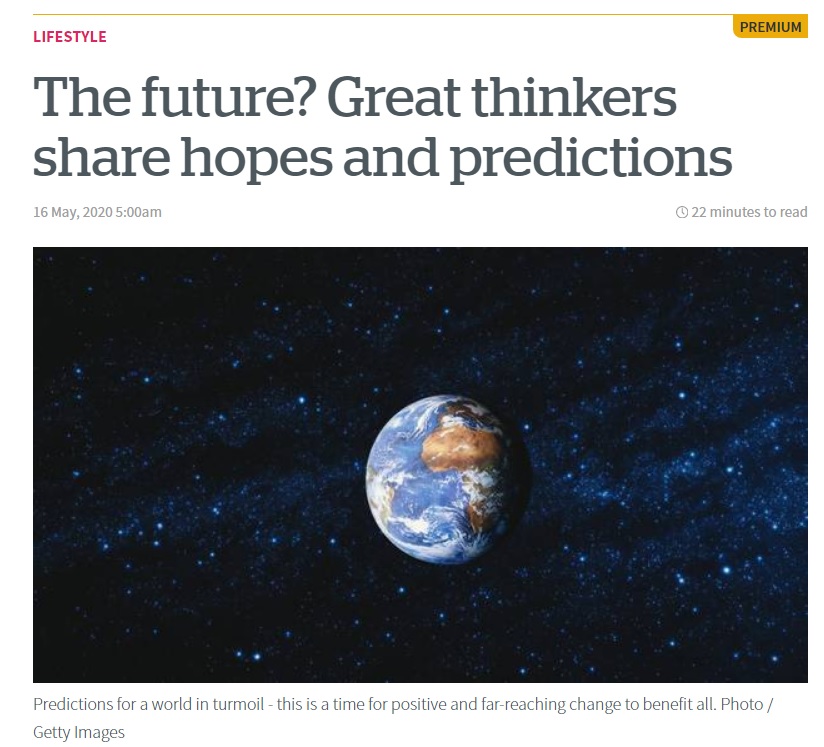 Now that we have reached May 2021, it is easy to see that Covid-19 was our wake-up call. People of all nations took note that it was only the countries who trusted independent science whose lives and economies were saved. So what else had independent science been telling us lately?

We emerged from lockdown newly able to appreciate the multiple warnings given by tens of thousands of scientists: “If we don’t act soon, there will be catastrophic biodiversity loss and untold amounts of human misery”. Most of the global population now understood that Covid was just a gentle warning. Climate change would be far worse: biodiversity crash, antibiotic resistance, soil loss, and new viruses released into human populations as animals were forced to mingle with us due to habitat loss.

New Zealand 2021 is a completely different place. Kids have taken back their streets from cars. Pedestrians and cyclists have priority cars in urban areas, cycleways are bigger and better maintained than roads. You rarely see single-occupant cars since the tax tripling their price unless they were purchased by community groups as share cars. All public transport is free and electric-powered. In cities cars are banned except on arterial routes, and deliveries happen at night only. Large trucks are extremely rare on the road as road freight is now limited to one hundred kilometres maximum and all long-distance freight is by electric rail.

All new housing developments are now natural looking and sustainable. Property developers are no longer permitted do their ground-zero scraping-off of vegetation, soil, and life. Only the building footprint and very small access roads can be cleared and nothing else can be impervious to rainfall. All new houses are required to be built from natural locally sourced materials and the export of unprocessed logs is banned. The new dwellings are by law oriented to the sun so passively heated and have insulation ratings three times higher than the current standard. They all catch rainwater in tanks, and greywater is treated on site, and most have composting toilets, encouraged by high costs for connection to wastewater infrastructure. All existing houses are undergoing or will be a retrofit to the same level of insulation, and water capture and treatment.

Streams and rivers are already noticeably cleaner now we’ve solved the run-off problem in urban areas. Carparks and footpaths have had millions of holes drilled in them so water can soak into the ground, where the pathogens, sediment and metals it carries can be assimilated and neutralised by bacterial action in the soil. No wastewater treatment plants now discharge to rivers or sea, all now go to constructed wetlands after bio-digestion, the biogas produced powers the plants and compost is produced from plants taking up the nutrients.

In rural areas streams are running clearer now clear-fell forestry on hills is banned. Almost all steep land is being planted with natives, with permanent forest carbon sinks driven by the rising carbon price, currently at $200/tonne. Streams are healthier because stocking intensity is falling, due to the ban on artificial fertiliser and imported feed like palm kernel. Soil health and water-holding capacity is rapidly improving, negating the need for irrigation. Soil carbon sequestration is rising as agriculture moves into regenerative mode and horticulture transitions to permaculture. Antibiotic, pesticide, and herbicide use is dropping drastically. We just no longer need them.

With the power-hungry drainage pumps shut off, wetlands are recovering all over the country. This has already increased biodiversity, the uptake of nutrients and it will help reduce the flood flows from the intense new climate change storms.

Home and business power bills have dropped drastically now all power companies have been renationalised into the NZ Electricity Department. People soon got used to having the washing machine not available immediately but turning itself on for off-peak pricing hours. Most houses now heat their water with subsidised solar panels and provide much of their own electricity with photovoltaic panels.

Water bottling by international companies ended when government followed the Waitangi Tribunal advice and gave the ownership of water back to Maori who immediately placed a big charge on commercial water takes and made water free to all New Zealanders. All waterways have been taken out the RMA as they are living entities not resources and are managed by a waterways commission dominated by tangata whenua.

The change from GDP growth as the government’s main goal to a Genuine Progress Indicator has left all business with negative environmental and social externalities uneconomic and this has revitalised small local business.

These massive changes are just the beginning of a transition of everything we do from ecocide to true sustainability. Now that New Zealanders feel positive about their futures, and are less dependent on other countries they feel safer and more resilient and young people wonder why we took so long to wake-up.